Razer has long been known for its top-notch PC gaming hardware, spanning from ultra-slim laptops to desktop behemoths, and has garnered quite the fanbase over the years. Understandably, therefore, the company’s decision to acquire the smartphone startup Nextbit at the start of 2017 was a little surprising. But after eleven months of hard work, something finally came out of that bold move: The Razer Phone.

Like the other releases in Razer’s line-up, the Razer Phone is built with gamers in mind. Sure, it deviates from the direct and somewhat ludicrous approach that devices like the Nokia N-Gage and the Samsung SPH-B5200 employed back in the day, but it has enough going for it to please the average mobile gamer. Well, almost enough.

If you’ve seen the Nextbit Robin, you will likely find the Razer smartphone very familiar. Instead of plastic, however, Razer has wrapped its new offering in anodised aluminium.

The power button on the side is fitted with a fingerprint scanner, which is admirably accurate and snappy. A SIM and microSD combo slot sits right above the power button. Then you have the volume buttons on the left, the front-facing 8-megapixel camera above the display, and a 12-megapixel dual-lens camera with a dual-tone LED flash at the back.

On the bottom edge is a lone USB-C port. Like the latest iPhones and Google Pixels, the Razer Phone lacks a headphone jack and instead comes with a USB-C-to-headphone adapter.

With so much competition among top-tier mobile phones, the Razer handset is a bold first take on the saturated market. Most of its features are well on par with what the current crop of high-end smartphones offer, but the screen and the sound are two aspects that tip the scales.

The Razer Phone’s 5.7-inch display is a sharp QHD (1440 x 2560) IPS display, whose edge-to-edge design, vibrant colors and brilliant detail are just as impressive as its jaw-dropping 120Hz refresh rate. You can, therefore, expect a strikingly smooth gaming experience when playing action-packed games like Titanfall Assault, Arena of Valor, and Final Fantasy XV, all which have been well optimized to take advantage of the Razer Phone’s ultra-fast refresh rate.

Even when you’re not gaming, you’ll undoubtedly appreciate the Razer’s display. Scrolling down web pages and sifting through apps looks much smoother and natural than on other devices.

Flanking the display on the top and bottom are Dolby Atmos-tuned stereo speakers, which are arguably the best pair of speakers ever put on a smartphone. They’re impressively loud, and there’s virtually no distortion at maximum volume. You’ll appreciate the quality a lot when holding the phone in landscape to play your favorite games or stream shows on Netflix.

The Razer Phone comes with Android 7.1 Nougat, and thankfully, it doesn’t do much to alter the UI other than a preinstalled Nova Prime launcher. The launcher lets you customize every bit of the interface, but if you’d rather have stock Android, you can easily uninstall it. Razer is optimistic that Android 8.0 Oreo will be available for the smartphone in early 2018.

Essentially a gaming phone, the Razer Phone comes packed with a myriad of game-centric software features. The Razer Theme Store, for instance, is flooded with gaming-inspired themes, with which you can use to customize your interface.

Another app, Game Booster, lets you tweak the frame rate, resolution and CPU clock speed for each game individually, and can come in handy when you don’t want to make changes that affect the entire phone. You can also toggle between Power Save mode and Performance mode to max-out battery life and performance respectively. 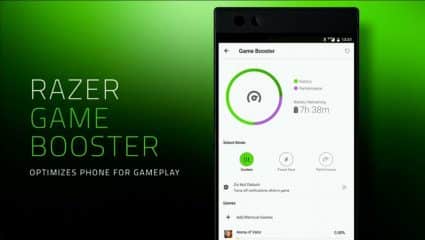 One small but significant downside to the software is the omission of a cloud-backup solution, for which the Nextbit Robin was known. Instead of offloading unused apps to the cloud like the Robin, the Razer Phone stores apps the old-fashioned way. But with 64GB of onboard storage, plus up to 2TB of microSD capacity, there’s little reason for concern.

Under the hood of the Razer Phone is a Snapdragon 835 processor, Adreno 54O GPU, and a generous 8GB of RAM. Unsurprisingly, lag and slowdowns are non-existent. You can throw pretty much any amount of multitasking on the phone, and it won’t break a sweat.

What is most impressive, however, is the 4,000mAh battery, which manages to last a full day of moderate use with a few hours of intense gaming, despite the power-hungry display and internal hardware. Moreover, the phone is equipped with Qualcomm QuickCharge, with which it can charge from 0 to 80 percent in under an hour.

The Razer Phone deservingly got some major slack for its camera when it first hit the shelves. Despite being an impressive dual-lens shooter, – wide-angle f/1.7-aperture lens plus telephoto f/2.6 zoom lens – the camera was criticized for being too basic.

Admittedly, the Razer Phone has miles to go before it can match the camera functionality of the Google Pixel 2 or Samsung Galaxy S8. Still, it’s commendable that Razer is working to improve its flagship.

So, where’s the catch?

So far, we’ve had little other than good things to say about Razer’s first smartphone. It is an excellent first-time attempt from a company that hasn’t done anything remotely similar to mobile phones in the past.

As a gaming handset, the Razer Phone delivers without fail. It boasts some seriously strong visual and audio credentials, and its inspiring internal hardware can chew through any mobile game out there. And, while the camera isn’t at all what you would expect from a premium smartphone, you’ll probably be too busy playing Shadowgun to go snapping pictures outside.

The real drawback of the Razer Phone is its design. While the aluminium finish gives it an edge over its indirect predecessor, the Nextbit Robin, the blocky design makes it pretty hard to use one-handed. Moreover, the sharp corners can dig into your hand, and at 6.95 ounces, it is also quite hefty.

Granted, you probably won’t think too much about looks and form when you’re shopping for a gaming smartphone. But Razer could have done more to justify the $699 price tag, especially when you have style champions like the Samsung Galaxy S8 and the recently released Galaxy S9 in the same price bracket.

On the bright side, you can tell that the device was designed primarily for landscape use. The large bezels above and below the screen may not be visually appealing, but in addition to housing some excellent speakers, they provide enough space to rest your hands when you’re gaming, so you don’t cover the screen.

The Razer Phone is unquestionably a solid smartphone that does a lot to please the rapidly expanding community of mobile gamers. If you’ve been waiting for the ultimate gaming phone, however, you’ll probably be a bit disappointed.

Of course, you get a screen with a 120Hz refresh rate, great speakers and some useful gaming features with the software, but there isn’t anything definitive enough to make it a much better gaming smartphone than other major flagships on the current market. For the same price or lower, you can get a phone that performs just as well, along with a far better design, camera, and a headphone jack to seal the deal.

Nevertheless, if you’re one of the many fans of the Razer brand or are just looking for something different, it may very well be the phone for you. 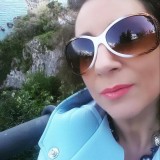 
See all posts from vigilancec