Yesterday Apple officially released the latest update to its mobile operating system, iOS 11.3. The new update brings with it many new features and updates, but the one that was probably most anticipated was the new iPhone Battery Health app that was promised after Apple was busted slowing down iPhones.

In your performance management, you will be able to easily check if your iPhone is being throttled or not. After this update, if you own an iPhone 6 or 6 Plus, iPhone 7 or 7 Plus there is a good chance that the phone is already being throttled. From your performance screen, you can choose to disable this throttling or not. But, if you do, you may experience early shutdowns of your device because of poor battery life.

One thing you should know. If your iPhone experiences an unexpected shutdown, it will turn on the performance throttling when it is restarted. So if something happens, you may need to check your performance again to make sure throttling hasn’t been turned back on without your knowledge. 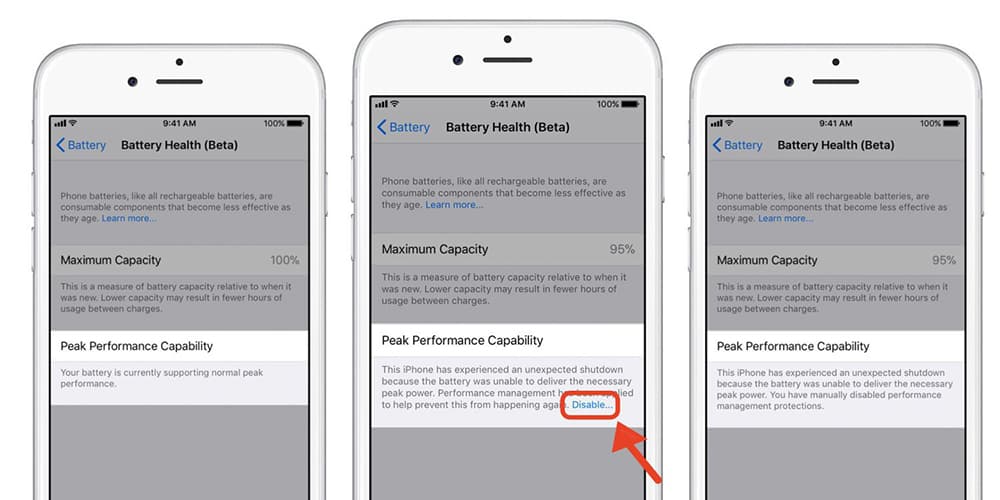 Of course, there is more to this update than the new Battery Health app. You can check out the full release notes below:

iPad charge management
– Maintains battery health when iPad is connected to power for prolonged periods of time, such as when it is used in kiosks, point of sale systems, or stored in charging carts

Privacy
– When an Apple feature asks to use your personal information, an icon now appears along with a link to detailed information explaining how your data will be used and protected

Business Chat (Beta) – US only
– Communicate with companies to easily ask questions, schedule appointments, and make purchases inside the built-in Messages app on iPhone and iPad

Health Records (Beta) – US only
– Access health records and view lab results, immunizations, and more in a consolidated timeline in the Health app

App Store
– Adds ability to sort customer reviews on product pages by Most Helpful, Most Favorable, Most Critical, or Most Recent
– Improves Updates tab information with app version and file size

Keyboards
– Adds two new Shuangpin keyboard layouts
– Adds support for connected hardware keyboards using the Turkish F keyboard layout
– Improves Chinese and Japanese keyboards for better reachability on 4.7-inch and 5.5-inch devices
– Enables switching back to the keyboard after dictation with just one tap
– Addresses an issue where auto-correct could incorrectly capitalize some words
– Fixes an issue on iPad Pro that prevented the iPad Smart Keyboard from working after connecting to a captive Wi-Fi access point
– Fixes an issue that could cause the Thai keyboard to incorrectly switch to the numeric layout when in landscape mode

This new update for iOS does bring with it many new features, but many of them are being overshadowed by the new Battery Health app. With this app, you can monitor the health of your iPhone battery and find out if your iPhone is being throttled or not. If it is, you can easily disable the throttling, which is a must needed addition to iOS since the recent revelation of iPhone throttling.

What do you think? Is this too little too late for Apple or are you glad to see them include this new feature along with a host of other bug fixes and new additions in iOS? Tell me your thoughts in the comments below.